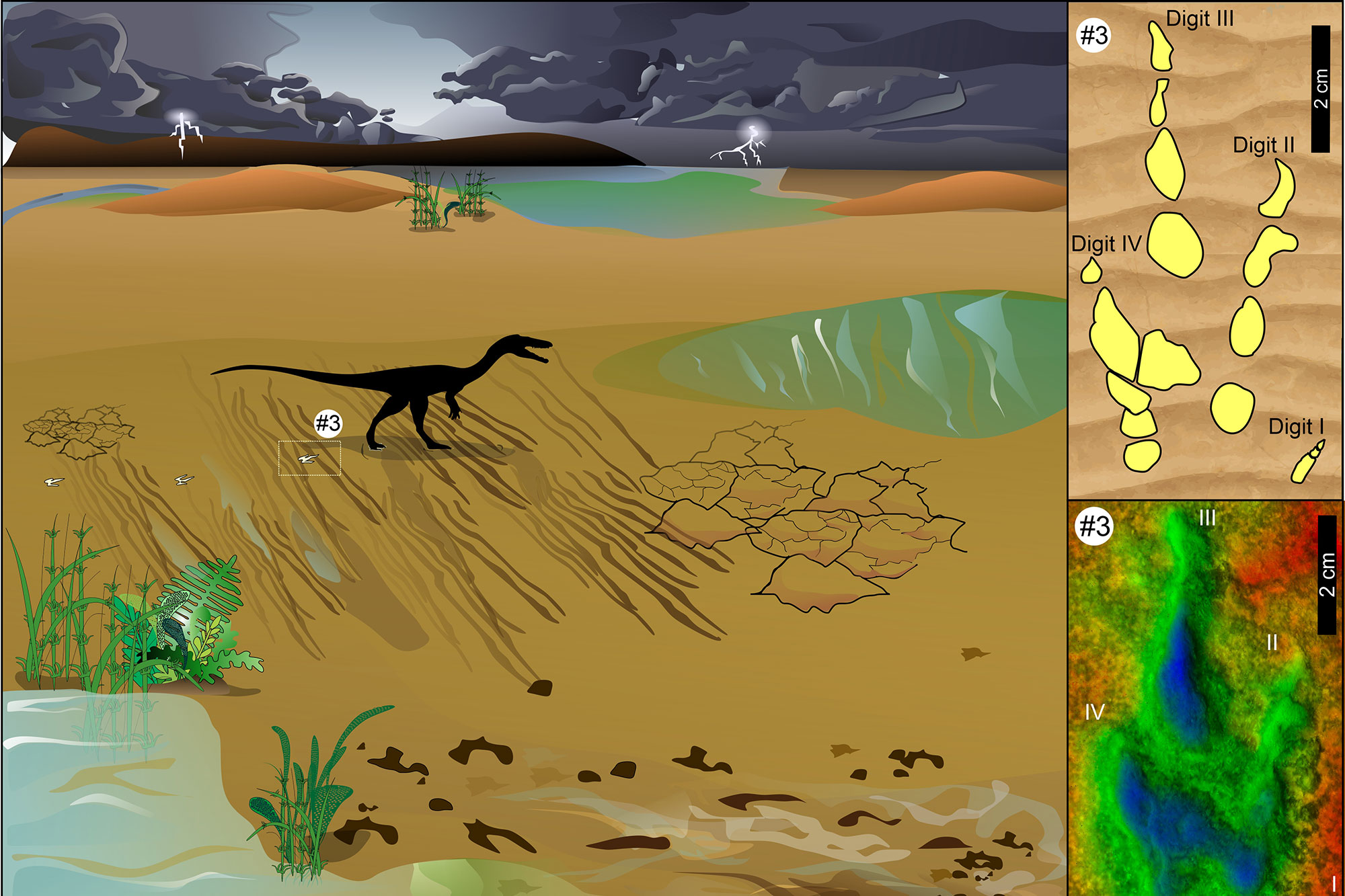 A fascinating research paper by University Associate Professor Emese Bordy of the University of Cape Town (UCT), who carefully studies a trail made by a tiny, nimble dinosaur nearly 200 million years ago, offers “evocative read “from a long time ago.

“Soaring for Shelter from the Storms: A Minute Southern African Dinosaur Track” makes for engrossing reading. And we’re not the only ones to think so. For her outstanding work on this paper, Associate Professor Bordy received the 2021 Outstanding Paper Award from the South African Journal of Science (SAJS).

The article was originally published on the SAJS platform in May 2021, and in March this year Bordy learned that she had been named the recipient of the award. The award recognizes the outstanding work of African scholars who seek to advance the mission of the SAJS: to publish high-quality research on the African continent or on issues relevant to Africa that interest readers of all disciplines, bring an important contribution to general knowledge and to the benefit of scholars, educators and the general public.

“To be recognized as an academic in this way for my work is a rare honor.”

“To be recognized as an academic for my work in this way is a rare honour. Most academics do great work throughout their careers, but only a few get recognition. This is so because rewards are rare for this group of high achievers. So, I’m thrilled with this accolade,” Bordy said.

Bordy, professor of sedimentology in UCT’s Department of Geological Sciences, said his research revealed that around 195 million years ago – during the Lower Jurassic period, a tiny dinosaur passed through an muddy near Nqanqarhu in the Eastern Cape, about 195 million years old. running speed of 12.5 km/h.

“We don’t know if this bipedal carnivore was avoiding being eaten, chasing its own meal, or darting across the landscape for some other reason. But we do know – based on the tracks themselves – that it was rolling very fast,” Bordy said.

Incredibly, millions of years later, several dinosaur footprints remain intact. They form a short track and provide an exciting snapshot of the animal’s behavior and the ground it ran on.

What the engravings reveal

Judging by the features of the tracks, Bordy said the footprints are likely those of a coelophysoid dinosaur, which mirrors the size of a large rooster or turkey. And when it crossed the landscape, the carnivore crossed a pool of stagnant water.

“The ripples in the rock around each fossil footprint provide evidence of microbial mats – a common feature of fossil footprints throughout southern Africa, and something that could have improved trace preservation,” she said. .

The dinosaur footprints were located on the surface of a sandstone and show four claw prints. But when she inspected the tracks closely, Bordy said it was obvious the dinosaur was putting most of its weight on just three of its toes.

Bordy is no stranger to research, but this time, she says, the process was different. Two “special helpers” accompanied her on the field trip and their unwavering support ultimately led to this award.

“For the very first time, my field assistants were my 10-year-old daughter with special needs, Lilla, and our personal rock, Rob, who is Lilla’s father.”

“For the very first time, my field assistants were my 10-year-old daughter with special needs, Lilla, and our personal rock, Rob, who is Lilla’s father,” Bordy said.

“I was also pleased with the commitment and focus I was able to devote to this article. The entire cycle of the project – from imitation to its acceptance by the SAJS – was completed under confinement in 2020. In this sense, this prize is a family prize.

Bordy is beyond thrilled that her work has been recognized by SAJS, especially since she had no idea her paper was nominated for this award.

“I am honored that my work is considered exceptional. The term means different things to different people, and most of the time, to me, exceptional means work that isn’t done yet. My work, especially research-related work (but sometimes even the dreaded scoring of student assessments), often remains unfinished. Even when part of the research is published, the overall project remains ongoing, and in that sense the fact that it is unfinished is what makes it exceptional,” she said.

At the same time, Bordy said the award also provides an opportunity to stop, reflect and be grateful for its many blessings.

“So often we get so caught up in the actions of each day that we don’t take a moment to just be grateful and reflect on what things really mean.”

“So often we get so caught up in the actions of each day that we don’t take a moment to just be grateful and reflect on what things really mean. Lately I’ve learned to do more of that, and it’s been working wonders,” Bordy said.